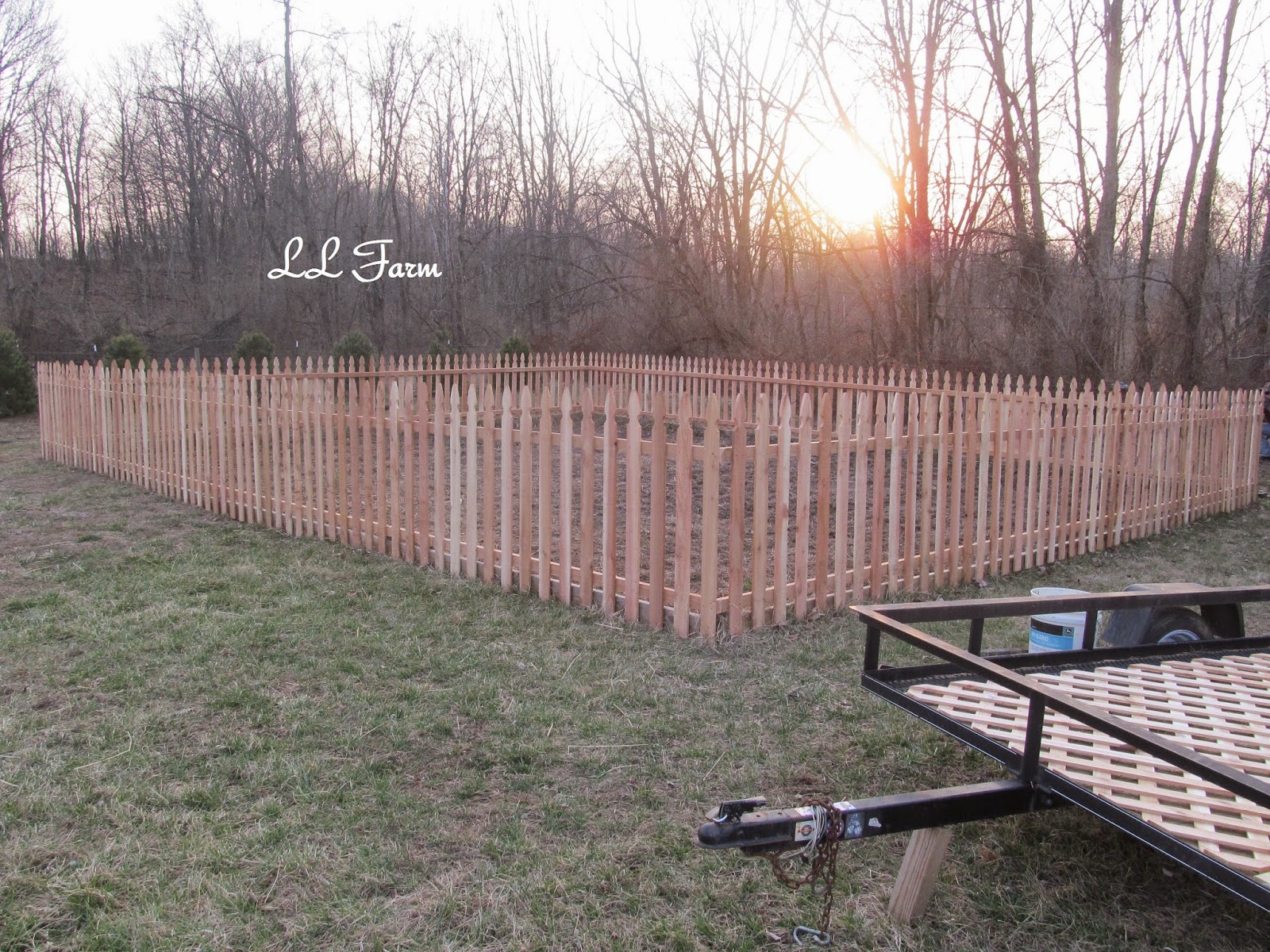 This is one of those projects that we priced different ways, to see which one was the cheapest.

Thankfully, creating this project from scratch would not be any cheaper then purchasing some pre-assembled fencing sections.  I say thankfully because Handy Hubby just does not have the time to make it right now and it needs we want it done!

Wood was cheaper then vinyl (even with buying paint or stain). 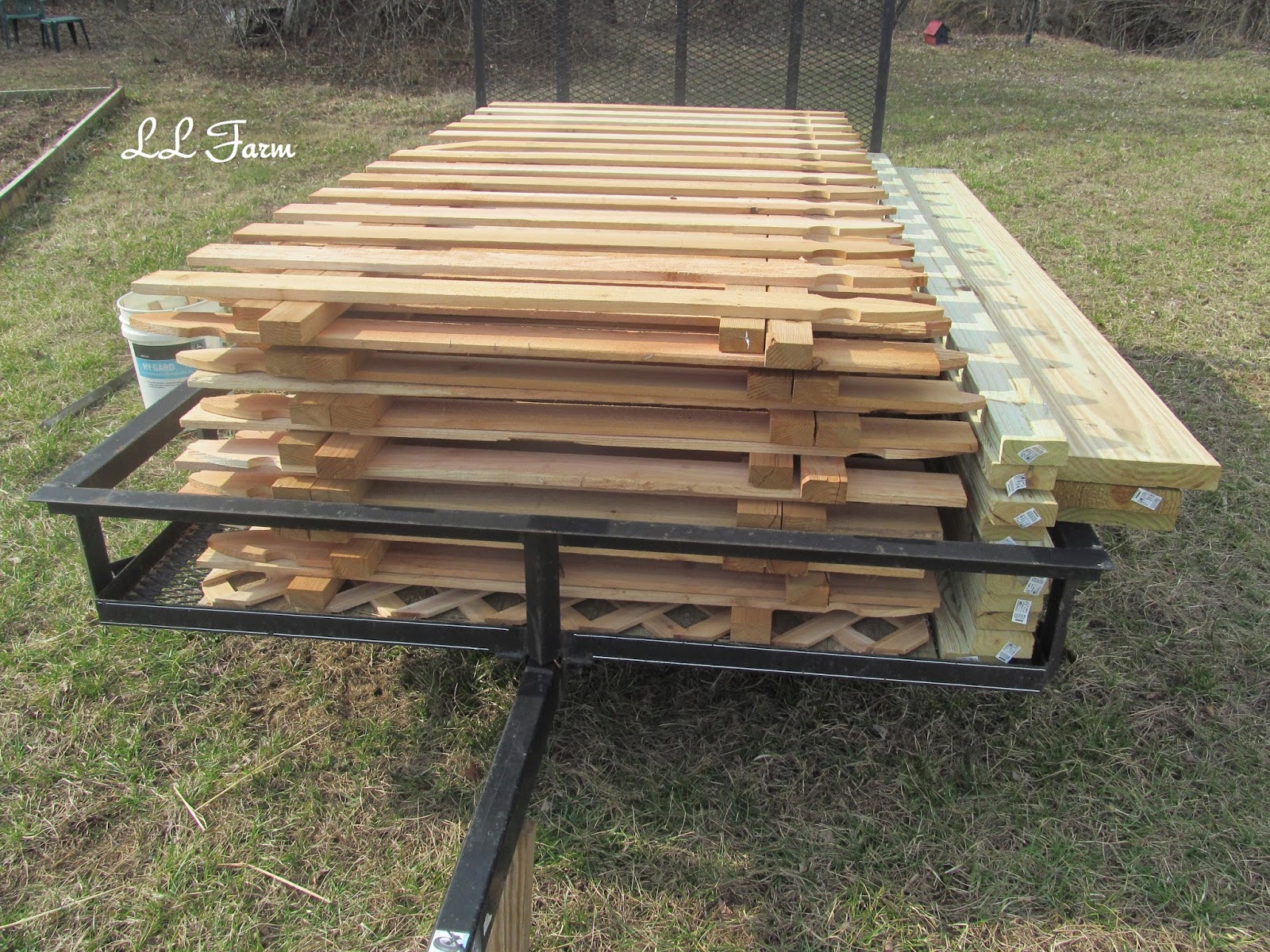 So here is what we came home with from Menards.
See the lattice on the bottom and some extra lumber?  That is for our grape arbor...coming soon! 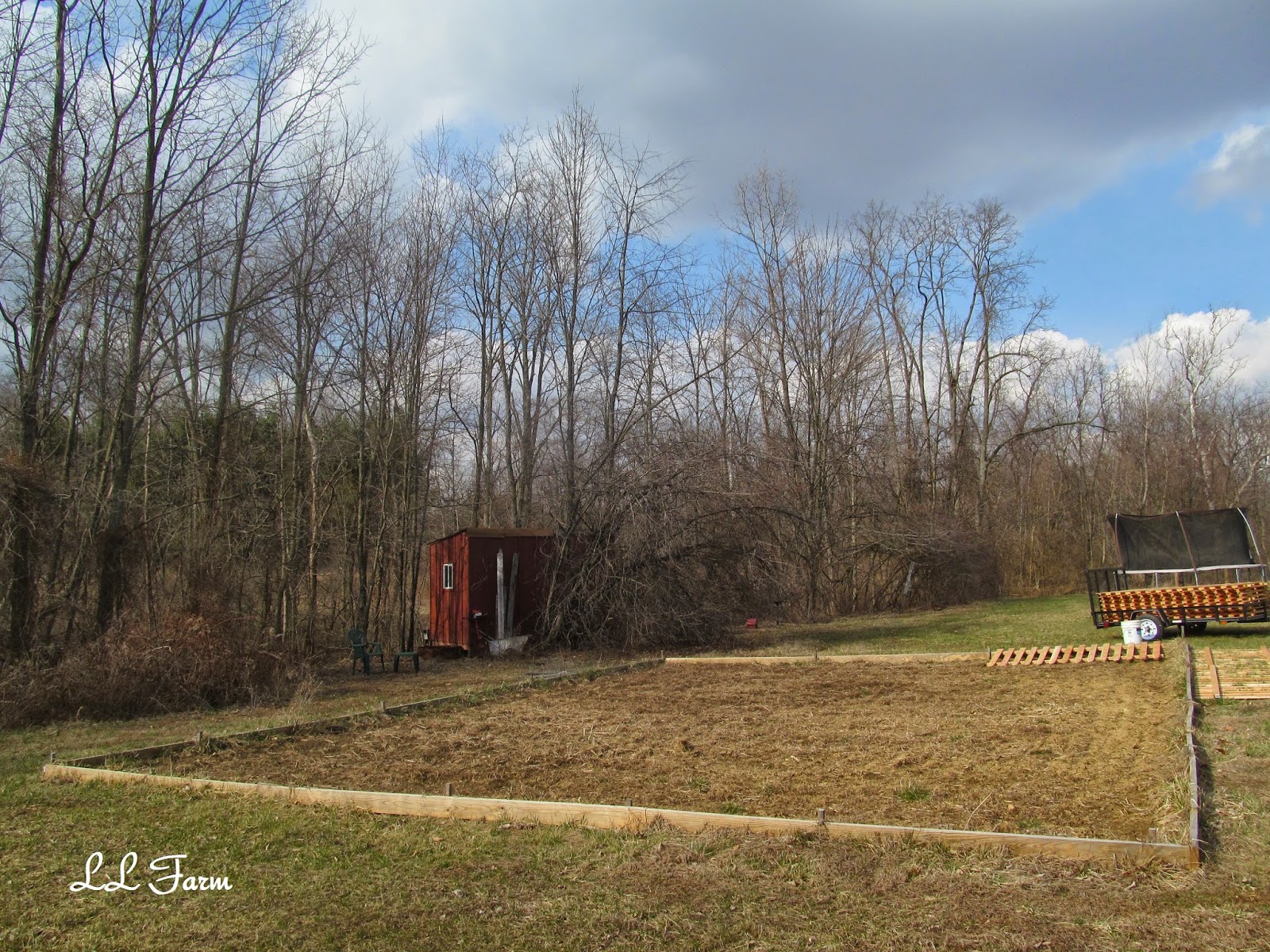 When we originally put the garden in  we rototilled the section and put 2x8's around the perimeter.  It measures 30x36.  On our 'to do list' for the last two years has been the fencing.

We started with the corner's.
Handy Hubby attached the panels to the 2x8's that are surrounding the garden. 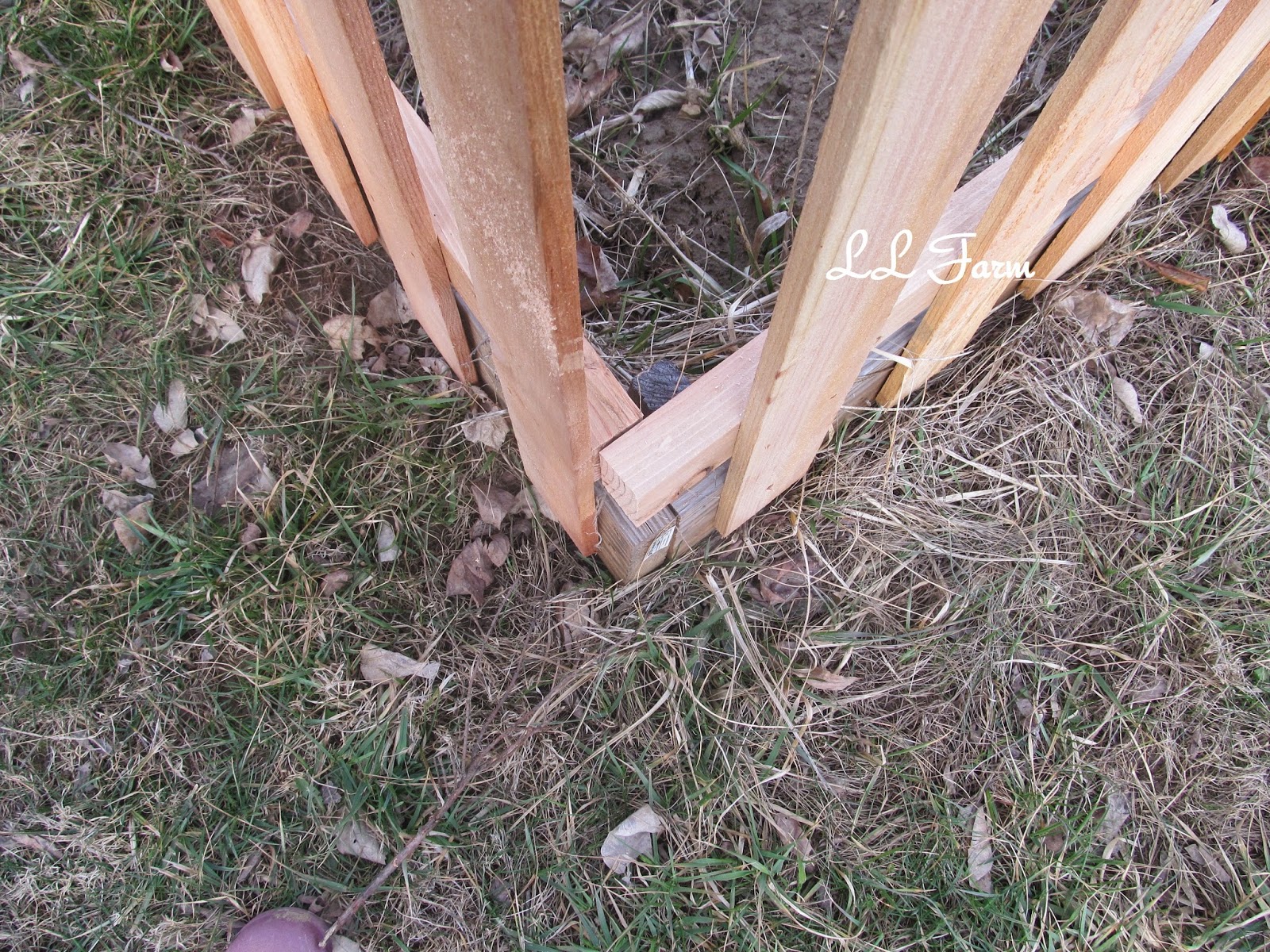 He cut the end of one panel that is sticking out on the bottom and not the other panel.  This makes for a snug fit.  He screwed the corner pieces together. 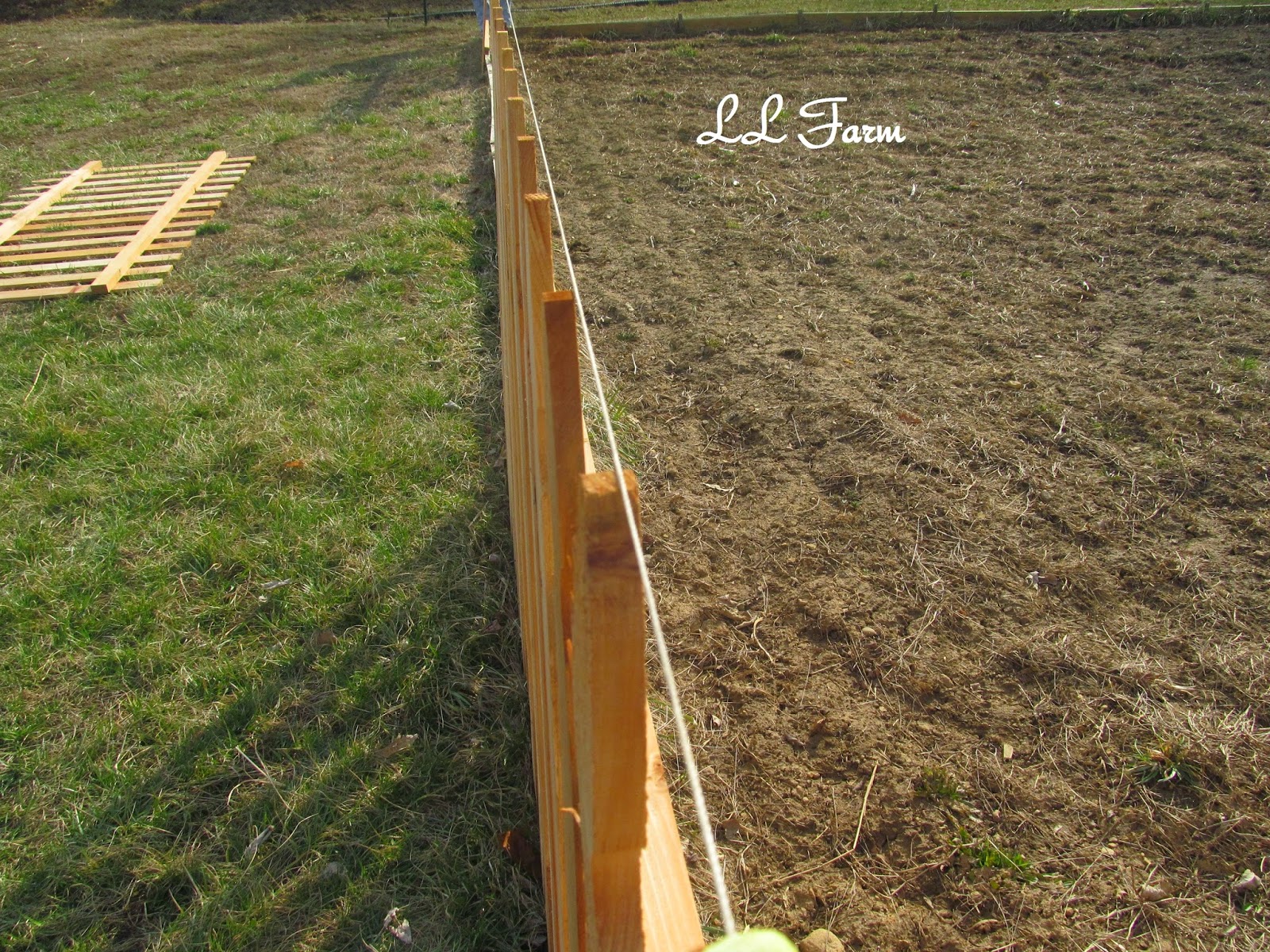 We created a straight line by lining up string between the two corner sections. 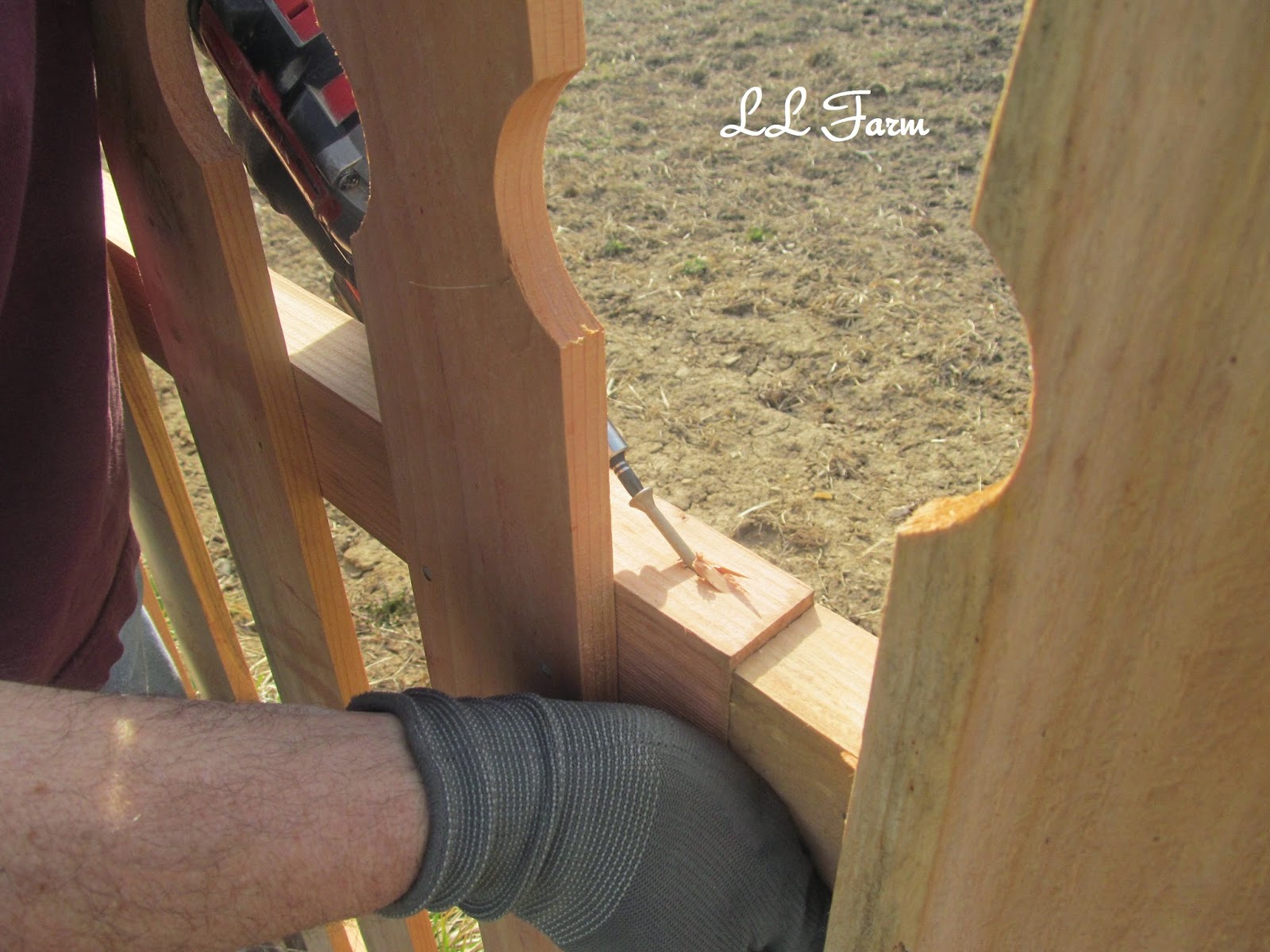 Then filled in between the corner sections with panels, screwing them together at an angle. 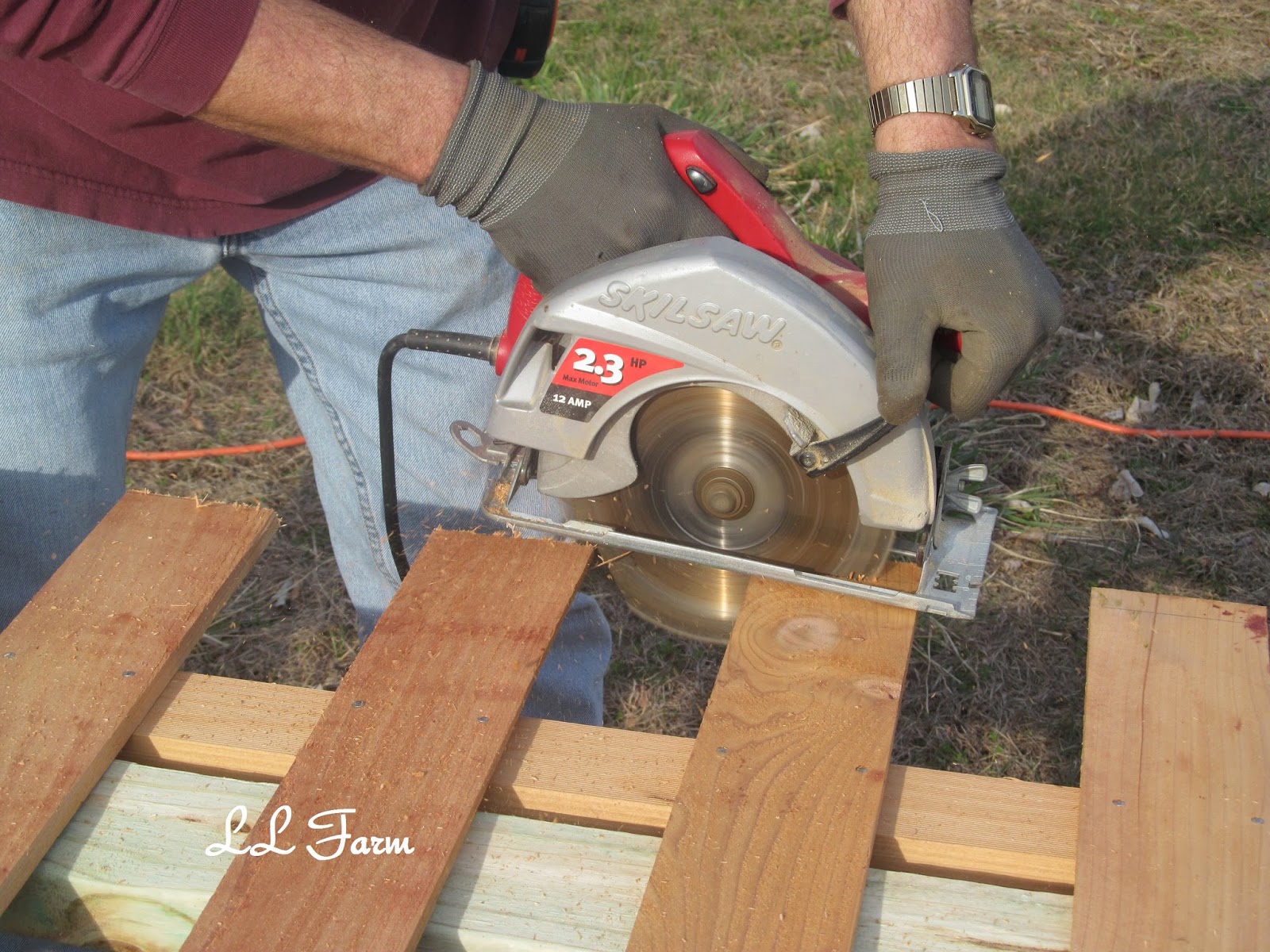 Doing a rough fit, he marked the panels on the bottom and cut down as needed, trying to keep a fairly straight line on top, while working with the uneven ground on the bottom.

He had to pry off slats as needed...

Marked and cut straight lines if a shorter width was needed to fill in a space. 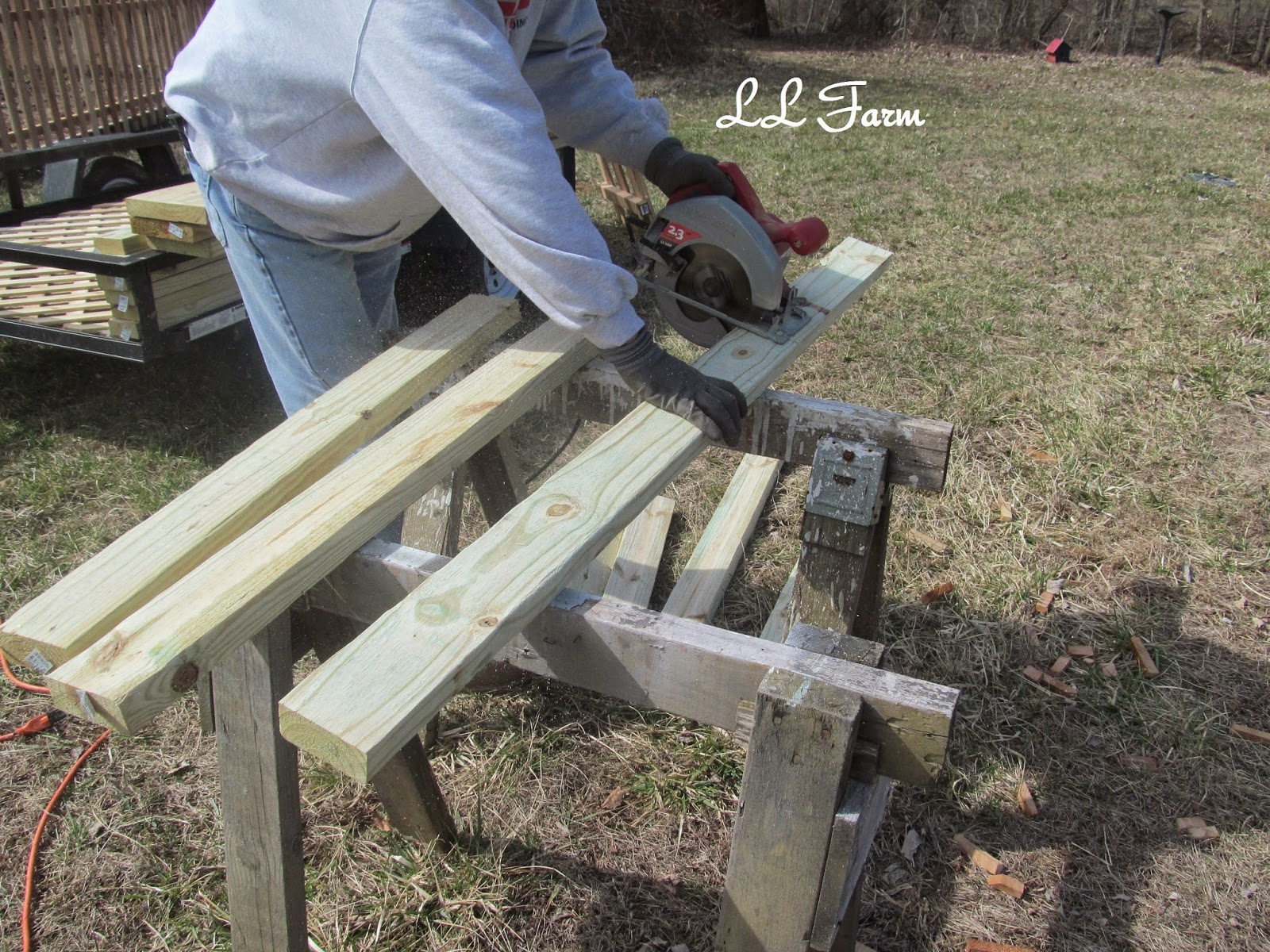 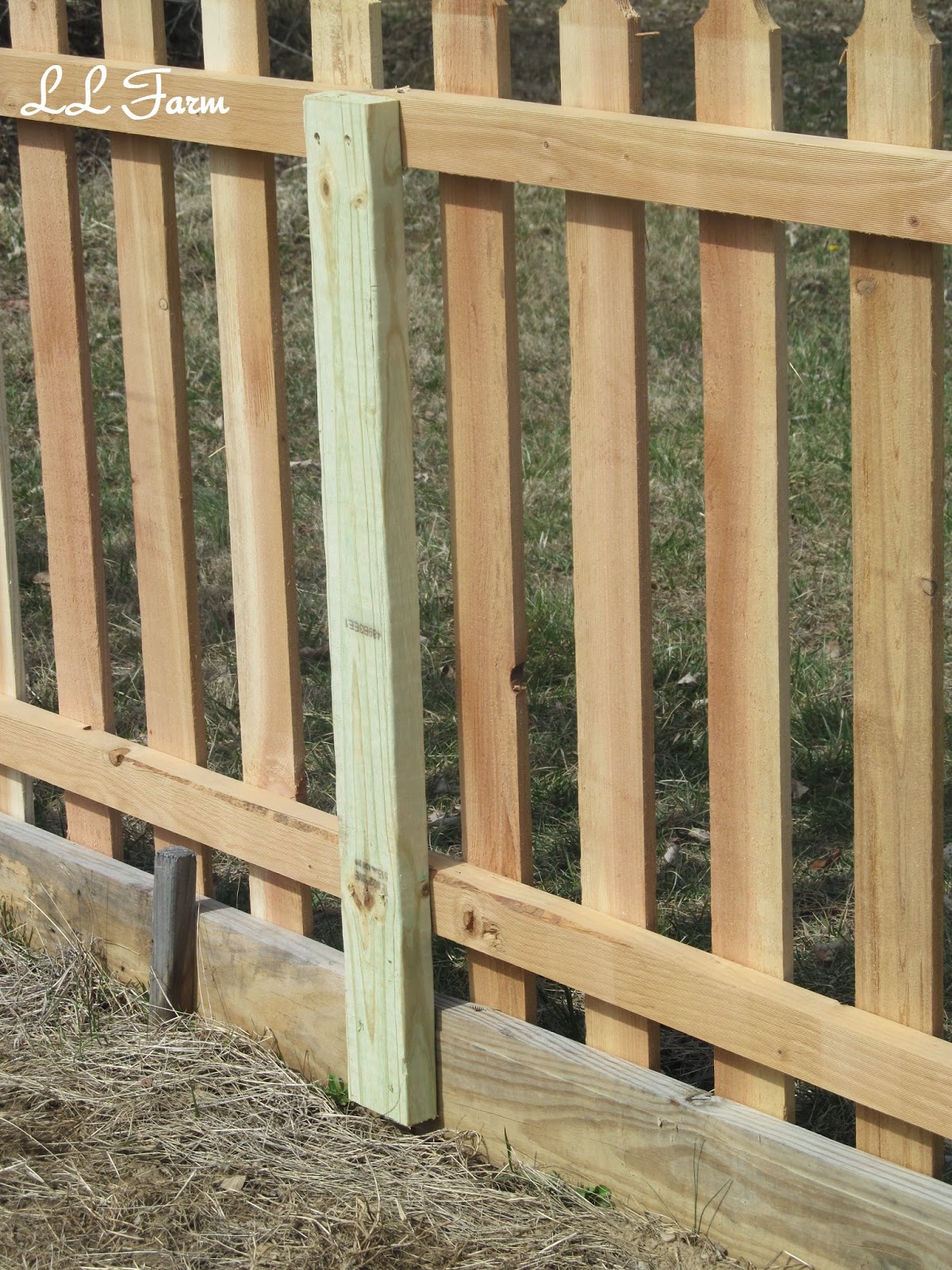 We get a lot of wind here, so he added extra support to the fence.  On the inside of the fence, he positioned the support pieces where the panels were screwed together. 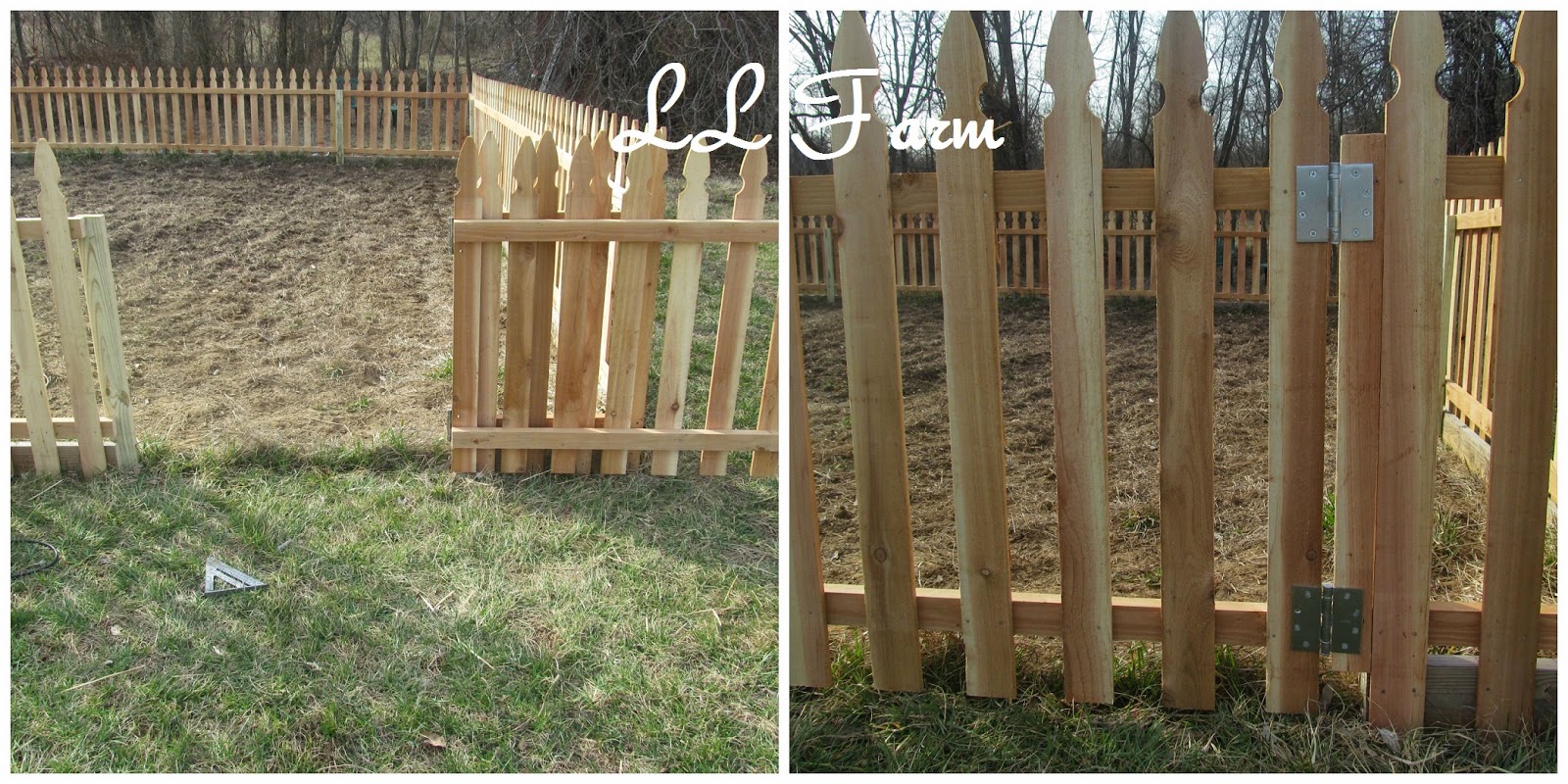 He measured and cut an opening on the 2x8 that was surrounding the garden and also cut an opening for the gate on the picket panels and added hinges.  He made sure the gate opening is wide enough for the rototiller to get in.  Deciding where to put the gate was based off the layout of our garden rows that we have used the last couple years. 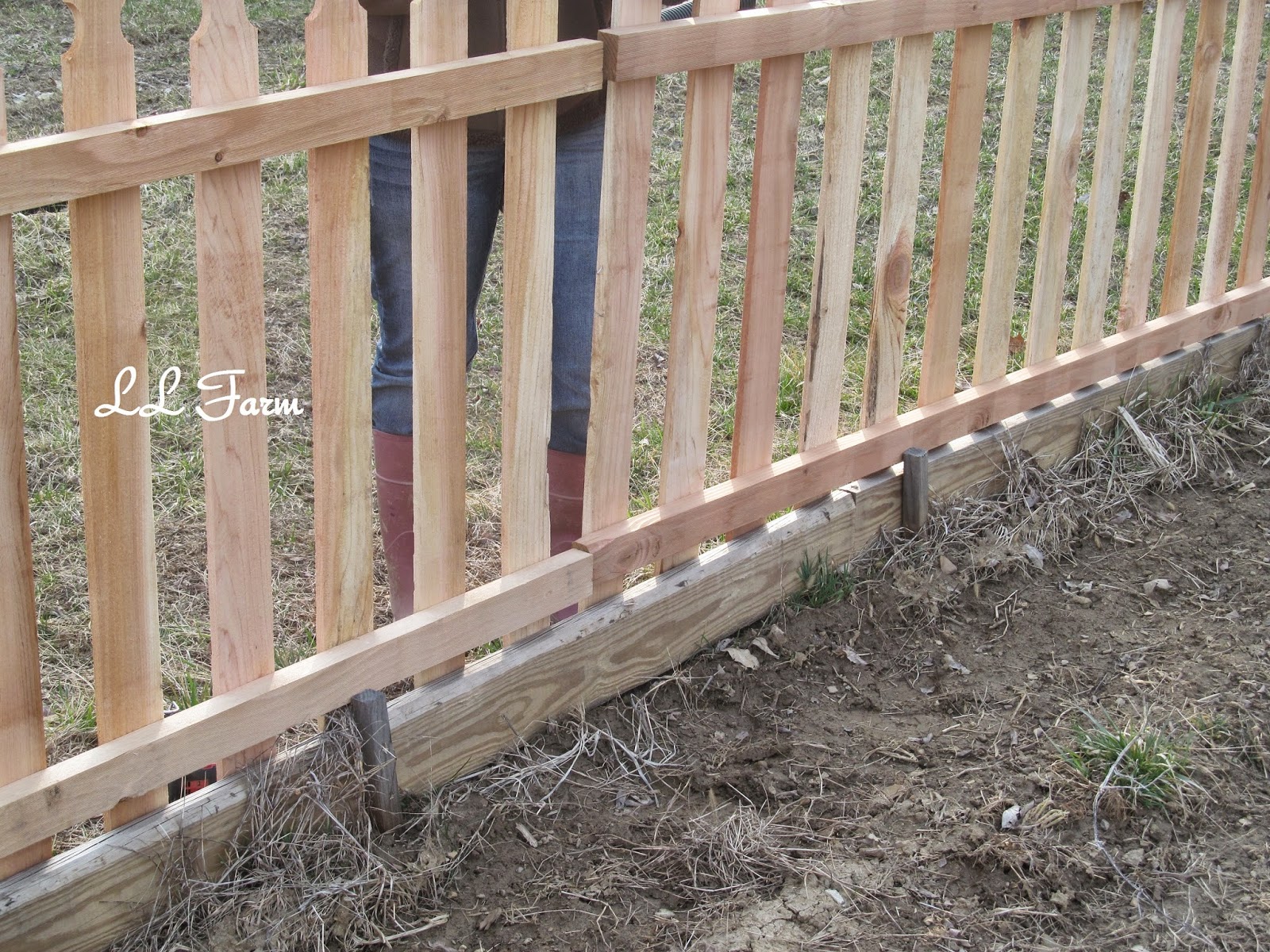 My job was to hold the panels evenly while Handy Hubby screwed them together.
Whew...I don't know what he would have done without me (smile)! 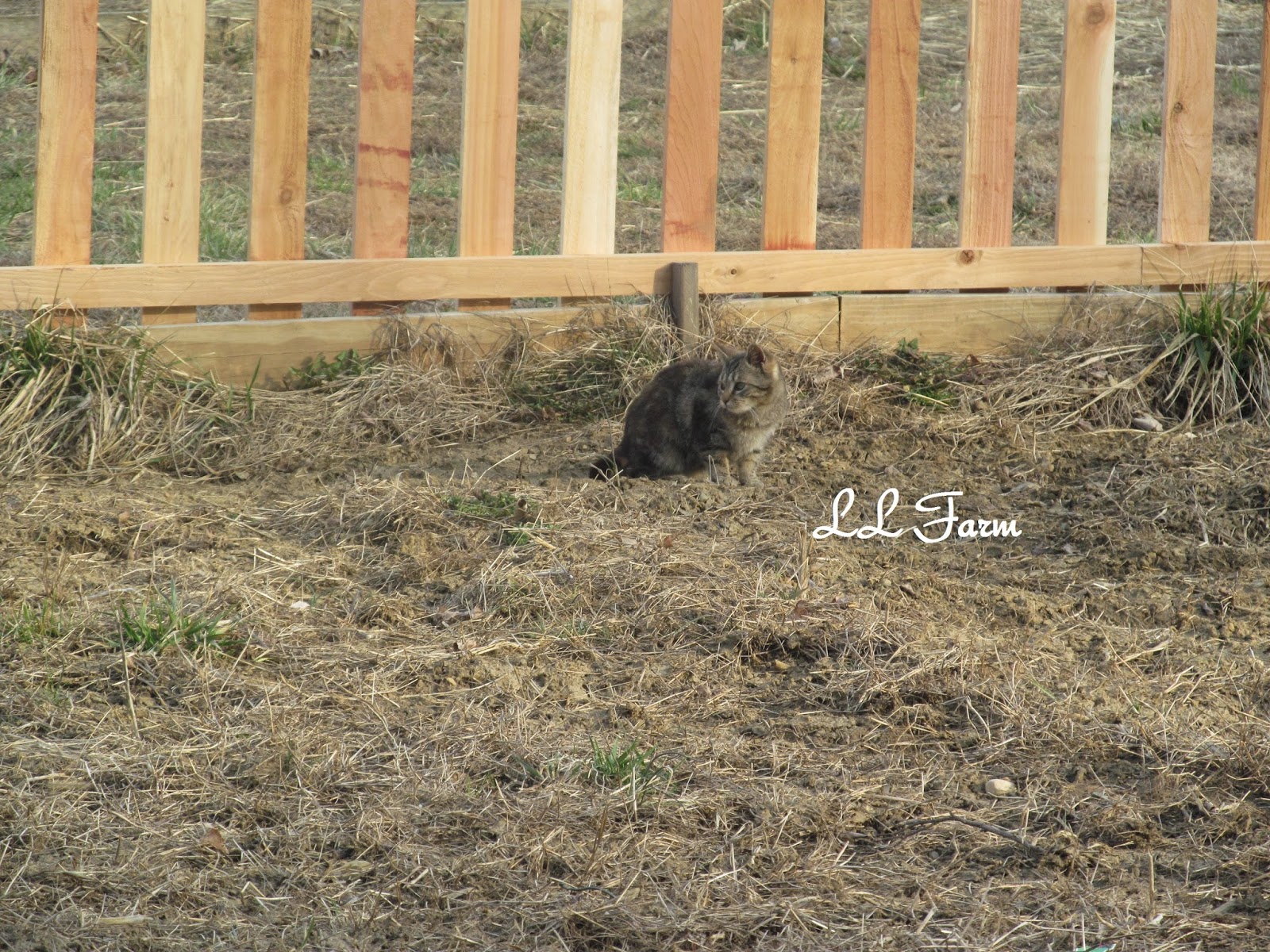 Marina was the supervisor for the day.  She was inspecting the work closely.

The garden fence has a few purposes:

*  It will help to keep some wild animals out of the garden.

*  We want to put chicken wire around the inside of the fence.  The chickens can then forage in there during the off garden season.

*  Although it is functional, we also wanted it to be...pretty...and nostalgic.

My grandparents had a fence around their garden.  It was not a picket fence, but it is still a warm memory that I have from my childhood...simpler times...working in their garden with my aunts and cousins.
And, if you watch 'The Waltons', this garden fence reminds me of theirs.  Again, a simpler time...families planting and working in a garden to provide food for their families.

The garden shed and chicken coop are near the garden and are both stained.

Our house is white and I am leaning toward painting the fence white for that farmhouse/cottage nostalgia feeling.

What do you think?

stain it
or
paint it white?

I am hoping to get this completed soon.  Then we can add the chickens wire.  Maybe the chickens can have a little time in there before we till it and start planting our garden.
Email ThisBlogThis!Share to TwitterShare to FacebookShare to Pinterest
Labels: Around The Farm, DIY - Building Projects, Gardening